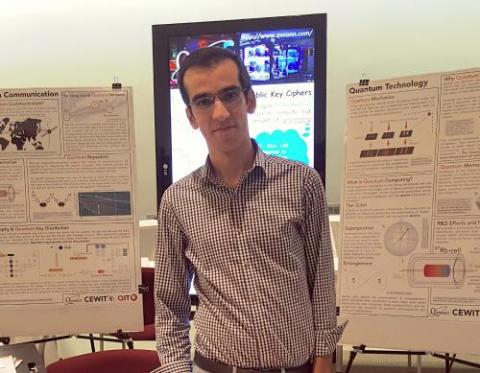 Mehdi is the first YQI Fellow and is joining Jack Harris’ laboratory. He is today featured in our member spotlight. Learn more about the YQI Fellowship Program here.

Mehdi received his M.Sc. in Nanophysics working on designing nanostructure solar cells at the University of Tehran in Iran where he spent the first 25th year of his life.

“I got obsessed with quantum physics and its interpretations back when I was in high school, reading the fake copies of Scientific American journal in Iran. My dad realized how much I loved the topic so he would do anything to get his hands on the magazines for me every month. I would read the articles, translate them and then go to school and brag about all the things I knew about quantum physics. It only took me 13 years of college and a PhD in quantum physics to realize how little I actually know about quantum!”

Mehdi joined Stony Brook University in 2012 to do his PhD where he primarily focused on creating a quantum information processing platform based on light-matter interfaces at room-temperature to be use as a qubit. The main goal of his work was to design a platform that can be used as the “second generation” of quantum technologies, devices that not only individually work with high fidelity, but are also designed to be scalable in terms of both resources and the quantum connectivity between them. Mehdi and his colleagues showed that such a platform can be realistically used to develop quantum systems such as quantum repeaters for long-distance quantum communication or oven multi-mode quantum simulators for quantum many-body simulation. He earned his PhD last month on this topic.

At Yale in Jack Harris’ lab, Mehdi will try to access new regimes of quantum optomechanics by creating coupling between photons and magnetically levitated drops of superfluid helium.  If Mehdi and his colleagues manage to couple to the optical and rotational modes of these droplets, due to the very interesting properties of superfluid, they expect to achieve ultra-strong single-photon couplings and investigate the nonclassical motions of these droplets. In another word, they are aiming to achieve such high couplings to measure the quantized motional behavior of these massive objects. This would be the first demonstration of quantum effects in the motion of a massive object that is not a harmonic oscillator and can create the pathway to observe many interesting quantum effects in similar large objects.

“I used to be a blog and magazine author back in Iran and once I wrote a long article about myself pointing out the most stupid thing I have done in each year of my life. My favorite one is when I was 11 years old, starting my 6th grade. The very first week of classes, I got my first bad grade of life. It was like a C or something in science. I was so scared of showing my weekly report card to my parents to sign that I faked the symptoms of appendicitis the night before the deadline to hand in back the signed report cards! I knew some of the symptoms because my brother had to remove his a few years back. I guess you can see where I am going with this story. After many inconclusive test results and hours of my devoted non-stop acting, the doctors were scared of waiting longer and eventually decided on doing the surgery and remove the appendix. Of course, it was in a perfectly healthy condition and the doctors sarcastically thanked me for gifting them a healthy appendix for their students to see! The best part is that a few years later I learned that my parents never cared about bad grades and did not believe in the grading system what so ever! Of course, a few years later they also learned that I faked the symptoms and well, that did not end well!”

“My most favorite publication is somehow unconventional! It is the 2011 OPERA paper, “Measurement of the neutrino velocity with the OPERA detector in the CNGS beam”. This is the infamous “faster than the speed of light” paper which turned out to be a simple BNC cable mistake. I like this paper because it shows how easy it is to convince a group of people to believe in something, based on “semi-shady” data, as long as it is something they really want to believe in. No one is immune to such biases even a long list of decorated scientists. To be fair, they were very clear and skeptical in the paper but still I find it very interesting how a loose BNC put a whole community in such a trouble.”