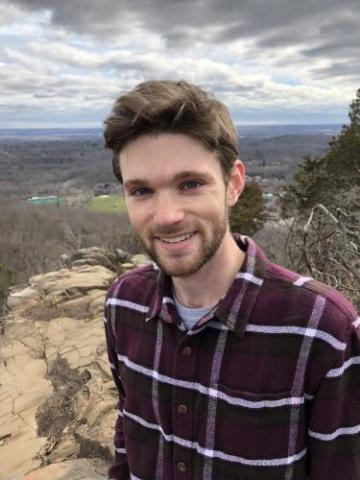 Connor has been awarded the 2018 NSF Graduate Research Fellowship. This program recruits high-potential, early-career scientists and engineers and supports their graduate research training in STEM fields. He is today featured in our member spotlight.

Connor grew up in Virginia and attended the Thomas Jefferson High School for Science and Technology in Alexandria, VA where he took a course in mathematical methods for physicists. This was this course which gave Connor his interest for the field. He went on to study physics at Duke University, where his research focused on a variety of topics within the field of condensed matter theory, including quasicrystal formation and the design of novel quantum Monte Carlo methods. It was this later work, with its joint focus on quantum systems and computational complexity, that sparked his interest in quantum information and quantum computing. Connor joined Liang Jiang’s group and the department of Physics as a graduate student in the Spring of 2017.

“David DiVincenzo famously laid out a set of five requirements for quantum computation, one of which is the ability to perform reliable measurements of a quantum system’s state. In any quantum computing architecture, the ability to perform such measurements with high accuracy will be crucial, and I have been interested in developing new ways to make high-fidelity measurements in the circuit quantum electrodynamics (circuit QED) systems studied in the labs here at Yale.” Connor and his colleagues have recently developed a new protocol that could enable one to perform measurements with unprecedented accuracy in these systems. The exciting aspect of this measurement protocol is that, though it was designed with Yale’s circuit QED systems in mind, in principle it could be applied to a variety of other experimental systems—it would be incredibly exciting to see the method utilized elsewhere! More generally, because measurements play such a fundamental role in quantum information processing, the protocol could be useful in a wide variety of applications. Potential examples include gate teleportation, entanglement purification, and modular quantum computation.

Connor developed the measurement protocol in collaboration with several students in Rob Schoelkopf’s group (Sal Elder, Chris Wang, and Kevin Chou), and they are now working together on an experimental implementation. The experiment is still in the preliminary stages, but he reports that the initial results are quite promising!

He has also recently become interested in circuit quantum acoustodynamic systems, where superconducting circuits are coupled to acoustic vibrations. With the potential for both long mode lifetimes and compact designs, these systems have great promise as quantum information platforms. “I’m interested in developing practical ways to process and manipulate quantum information in these systems.”

Upper, D., The unsuccessful self-treatment of a case of ‘writer’s block’, Journal of Applied Behavior Analysis 7.3 (1974). [Be sure to read the whole thing!]