Yale to explore new building for quantum research and engineering 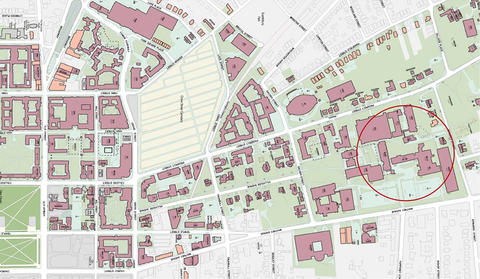 Following a key recommendation from a major university report on Yale’s science priorities, the university will consider developing a state-of-the-art building that is intended to transform the pursuit of quantum science, engineering, and materials research.

Yale officials announced the initiative Feb. 25, after university leaders discussed it with faculty at a town hall meeting.

One group will define a vision for how the space could most productively integrate existing resources and faculty from various engineering and physical sciences disciplines to advance the quantum science, engineering, and materials initiative outlined in the university’s science strategy report. The other group will advise the university on key technologies and their integration into a potential new instrumentation and technology development center within the building.

The working groups are expected to submit their initial recommendations this spring, Yale officials said.

“In fall 2019 we signaled a new era for research at Yale with the opening of the Yale Science Building. We must continue to invest at that scale, if not greater, to move quickly and strategically to realize our top science priorities,” said Yale President Peter Salovey. “A new physical sciences building will allow us to co-locate strengths across the university and to galvanize new discoveries in the basic and applied sciences. I am grateful to the members of the two working groups for making the time to do this important work for the university. I look forward to studying their recommendations.”

In 2018, the University Science Strategy Committee identified “quantum science, engineering and materials” — including aspects of physics, applied physics, electrical engineering, computation, materials science, and other disciplines — as a high-priority investment area for the foreseeable future. These intellectual domains continue to be areas of intense research and powerful new possibilities for universities, private companies, and government. The committee’s report recommended that Yale create a central intellectual hub for its quantum science, engineering, and materials endeavors, and develop a new building to house the cutting-edge experiments and infrastructure needed to further advance the field.

“Bringing separate disciplines together to work on a related area of strength will build important momentum,” Strobel said. “The development of novel technologies strengthens this approach and can also influence or inspire other disciplines.”

Quantum mechanics, and the science and technology associated with it, are rapidly changing humanity’s understanding of how the universe works. The study of all things quantum — from the dynamics of subatomic particles to the interplay of tiny bits of information in physical systems and phenomena as diverse as molecules, magnetism, and motion — has the potential to transform research in many scientific disciplines. It also could generate a wealth of new technology, medicines, materials, chemicals, and computers, and serve as a collaborative accelerator for future innovations that will emerge from the interaction of these diverse areas.

“It’s crucial that we continue to lead in this area, where we’re already the authors of so many technological breakthroughs,” said Jeffrey Brock, dean of science for the Faculty of Arts and Sciences and dean of the School of Engineering & Applied Science. “It’s also vital that we modernize, renovate, and think ahead to the role instrumentation development will play in engineering and science. We must continue to develop the synergy between these critical areas of strength to ensure Yale will be the home of many more breakthroughs at the interface of physical sciences and engineering.”

The working groups will develop the intellectual vision for the potential new space, how it would be optimally structured for research, and how faculty from different disciplines could be brought together. The groups will also begin to explore the potential for integrating various Yale technical facilities into an instrumentation and technology development center.

“This project has the potential to transform the culture of the physical sciences at Yale and to form new connections to engineering,” said Karsten Heeger, chair and professor of physics, who will lead the working groups. “It could shape our interdisciplinary programs across traditional research boundaries, advance our efforts in quantum science and instrumentation, and provide new opportunities for education and training.”

The working groups also will look at ways a major new facility could enhance collaborations among researchers at other Science Hill buildings, including the Sterling Chemistry Lab, the Yale Science Building, and Wright Lab — all of which have been built or renovated within the past five years.

The working groups’ endeavor takes place amid a deliberate transformation of Yale’s scientific enterprise. Since 2013, Yale has invested half a billion dollars in new buildings and renovations on Science Hill. The $283 million Yale Science Building, which formally opened in October, is the most recent addition.

In November, the university announced it will undertake a top-to-bottom renovation of Kline Tower, also located on Science Hill. When that renovation is complete in 2022, it will house the Departments of Astronomy, Mathematics, and Statistics and Data Science, as well as parts of the Department of Physics.

“Yale is serious about making an impact in science,” Heeger said.