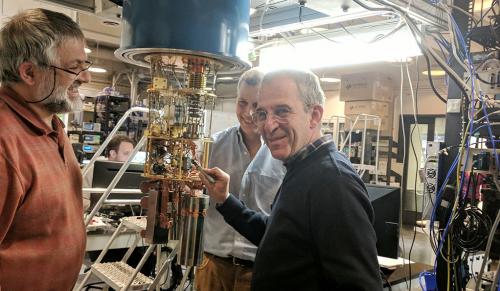 A startup called Quantum Circuits plans to compete with the likes of IBM, Google, Microsoft, and Intel to bring quantum computing out of the lab and into the wider world. There’s one good reason to think it might be able to beat them all.

That’s because Quantum Circuits was founded by Robert Schoelkopf, a professor at Yale, whose work in many ways has helped kick-start this exciting new era of quantum advances.

Quantum computers exploit two strange features of quantum physics, entanglement and superposition, to process information in a fundamentally different way from traditional computers. The approach allows the power of such machines to scale dramatically with even just a few quantum bits, or qubits. Those racing to build practical quantum computers are nearing the point where quantum machines will be capable of doing things that no conventional machine could—an inflection point known as quantum supremacy.

The promise of reaching such a milestone has transformed the field from a mostly academic endeavor into a high-stakes competition between the research arms of several big companies and a few startups. And everyone is using the superconducting circuits Schoelkopf pioneered.

He and colleagues were the first to create a “quantum bus” for entangling qubits using wires, as well as the first to demonstrate quantum algorithms and error correction techniques for quantum circuits.

Quantum Circuits’s other two founders are Michel Devoret, a professor of applied physics at Yale, and Luigi Frunzio, a research scientist in Schoelkopf’s lab (all three are in the photo above, with Frunzio, Schoelkopf, and Devoret starting from left).

“No team has done more to pioneer the superconducting approach,” Isaac Chuang, an MIT professor working on quantum computing and an advisor to the company, said in a release issued by Yale. “[The people behind Quantum Circuits] are responsible for a majority of the breakthroughs in solid-state quantum computing in the past decade.”