What makes a great qubit? Diamonds and ions could hold the answer 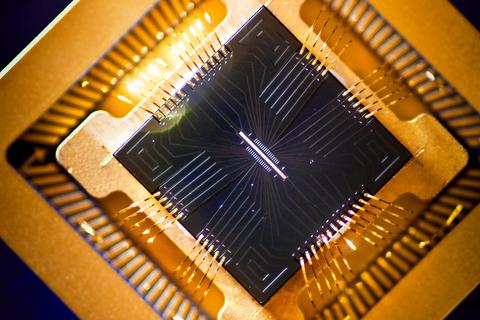 In the world of quantum computing, diamonds might be an engineer’s best friend.

That’s because a fabled, super-pure type of gem mined from the Ural Mountains has quantum properties that could provide a promising model for a stable, scalable quantum computer.

For several decades, scientists have been working on applying the strange laws of quantum mechanics—which govern the subatomic world—to the field of computing. So-called quantum computers, they say, could theoretically solve many problems much faster than any classical computer could. That’s because the basic unit of quantum information (a qubit) is fundamentally different in nature from the basic unit of classical information (a bit).

A qubit is sort of like a person—it contains multitudes. Whereas a bit has a definite value of 0 or 1, a qubit can exist in two states (both 0 and 1) simultaneously. Quantum particles spend their lives in a superposition of states: sometimes 0 and a hint of 1, other times possibly 0 but more likely 1, and so on. When we observe a qubit, or subject it to the influences of the macroscopic world, that mosaic of states “collapses” into a single reality—much like when you interact with or observe a friend, you’re only seeing a snapshot of her personality at any given moment. Qubits’ complexity makes them stronger. Together with lots of other qubits, they’re able to assess all possible solutions to a problem at once, yielding a vast mélange of options in just seconds.

Quantum computing, then, is extremely exciting. This sophisticated technology could enhance privacy and security, help build more accurate clocks, improve machine learning, and even assist in the creation of new materials. And yet, a major barrier to realizing these advances is qubits’ strength. Along with superposition, “entanglement,” which allows two particles to exert an instantaneous influence on each other, is a key element of quantum computing. But scientists haven’t figured out how to entangle a huge bundle of qubits at once, nor how to increase their coherence times (the amount of time a particle is locked in a state of superposition before collapsing into a single state). Until engineers can transcend these limitations, we likely won’t see a large-scale quantum computer available for commercial use.

“I think it’s going to be just a few years until we see quantum computers that are offering real value on the first initial [math] problem sets, which will maybe be more scientific in nature,” says Robert Schoelkopf, a professor of physics at Yale University and a director of the Yale Quantum Institute. “But then I think we’ll rapidly see an expansion of the kinds of problems these quantum computers can address as we get better and better at engineering them.”

To get there, Schoelkopf and others are trying to make qubits into Olympic athletes: strong, resilient, and cooperative in team settings. And they’re looking to the tiniest and purest objects in the universe for the most elite qubit prototypes, since any Schrödinger’s cat-like object that both is and isn’t in a particular state could be the basis for a viable qubit. Three major contenders for the gold medal in qubit-ing are nitrogen-vacancy (NV) centers in diamond lattices, trapped ions, and superconducting qubits—but they all have distinct advantages and disadvantages.

Qubits need to be isolated from their surrounding environment

The most amateur qubit, the isolated single atom, obeys one of the most important laws of quantum computing: that qubits need to be completely isolated from the outside world. This is the most basic form a qubit can take. When separated from the outside world in a vacuum, its energy states (sometimes called spin states) store quantum information in a way that is durable and long-lasting.

Too many interactions with the surrounding environment can deflate the integrity of the quantum system and cause it to collapse into a single reality, a process called decoherence. This is why experimentalists cool most quantum computers to very low temperatures: large copper-colored cylinders refrigerate so-called superconducting qubits (which companies like IBM and Google are investing in) so that they move more slowly and are less suited to interact with undesirable particles. Laser beams can also cool single atoms until they are nearly at rest by transferring momentum from the atom to the scattered laser light.

The problem with the isolated single atom, though, is that its neutral charge means it’s harder to entangle them because they’re not as reactive. And to build real quantum machines capable of super-powered mathematical acrobatics, engineers need to entangle lots of qubits.

“There’s a fundamental tension of trying to keep the isolation from the outside world while simultaneously controlling the quantum bits and making them talk to each other,” Schoelkopf says.

Qubits need to communicate effectively with other qubits

Take away one electron from a neutral atom and you have an ion—a positively charged particle. Ions interact strongly with one another, but scientists have played around with “trapping” ions in an electromagnetic field and then deep-freezing them with lasers to form a crystal of ions. Additional lasers can help nudge the crystals’ ions into a state of entanglement, and multiple crystals linked together subsequently become the building blocks of a larger quantum network.

The benefit of trapped-ion systems is that the ions are inherently going to affect one another. “When you physically shake one of them, all of the other ions feel it,” says Michael Goldman, a postdoctoral researcher at the Joint Quantum Institute in Maryland. Systems like this that are scalable (meaning engineers can make them bigger) and malleable are promising models for quantum computers—they can do very fast operations, Schoelkopf says. 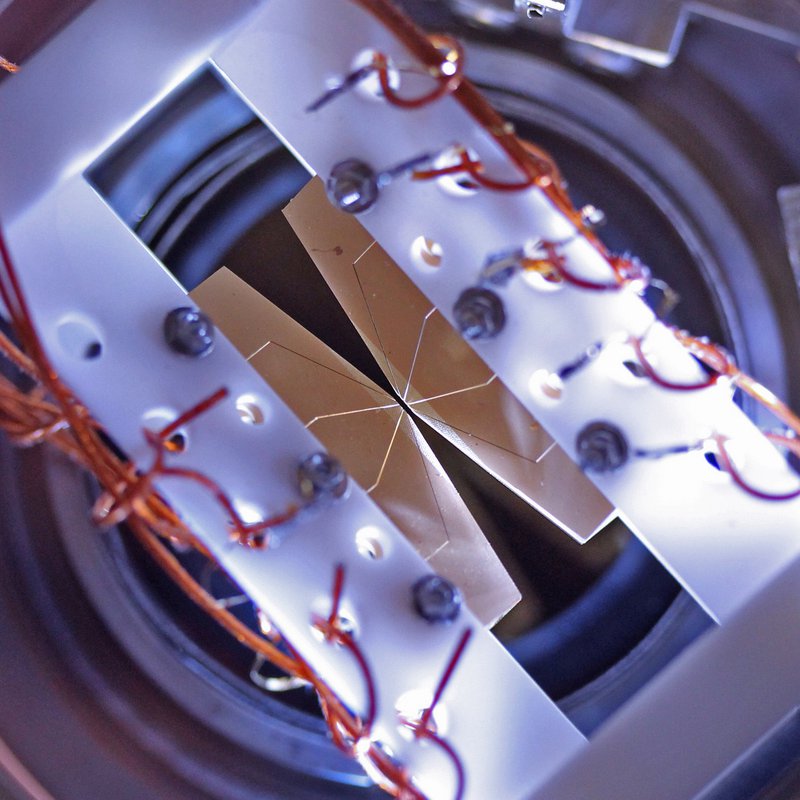 Trapped-ion qubits can do a lot. They’re easily entangled, plus scientists can turn that interactivity on and off easily so that individual qubits don’t engage with unwanted thermal fluctuations, or heat that would cause the system to decohere. And they’re becoming popular enough that companies like IonQ and Honeywell are investing in technologies that incorporate them.

“Nature makes [the ions] identical,” Goldman says. “They’re clean and have a long coherence time. As a system, they are really mature. Every system does have a problem with scaling past a certain point, but I think right now ion trapping has a viable path.”

Qubits need to be cheap and future-proof

Whereas the trapped-ion method requires elaborate tools—an electromagnetic field and lasers—to trap the ions, scientists are finding that Russian “magic diamonds” can hold qubits in place and thus act the same way that a trapped-ion rig does. By replacing a single carbon atom in a diamond’s atomic lattice with a nitrogen atom and leaving a neighboring lattice node empty, engineers can create what’s called a nitrogen-vacancy (NV) center. This is generally inexpensive since it’s derived from nature. The NV center is a flaw, or blemish, in an otherwise super-pure atomic structure.

These qubits—called solid-state spin qubits—are limited, though, since the system can only have as many qubits as there are neighboring carbon atoms (just three in the immediate vicinity). And NV centers are difficult to control, which means they might not be as scalable as other options. Nature, too, is fundamentally variable, and NV centers can be influenced by the nuclear spins of other atoms in the lattice—which means one diamond lattice is undoubtedly going to be slightly different from the next.

“In terms of being a general, perfect qubit, ions may be better suited… just because they’re cleaner,” Goldman says.

NV centers can operate at room temperature (trapped ions can, too), which is a massive bonus, depending on what scientists want to use them for. For example, we may need to experiment with types of quantum machines that aren’t large enough to maintain cool temperatures, or that need to accomplish tasks that wouldn’t be allowed in a standard ultra-cold arrangement.

Researchers at the Delft University of Technology in the Netherlands have entangled an NV center’s electronic spin with the spins of nine nearby nuclei, an impressive start to this burgeoning technology, which is being developed by a Harvard-bred start-up called Quantum Diamond Technologies.

Nicole Yunger Halpern, a theoretical physicist and quantum computing expert at Harvard University, says that NV centers are promising, but that the scientific community shouldn’t rule out other uses of solid-state qubits (qubits contained in solid objects). Ultimately, a mixture of qubit types in one system could be the best way to build a scalable quantum computer.

“Over the past decade or two, there have been revolutions in the way people have been using different types of platforms to build qubits,” she says. If scientists could figure out how to transfer information from one type of qubit to another, she says, they might be able to knit together a robust fabric of top-tier qubits.

Schoelkopf says this kind of information carrier can live longer than qubits created by conventional methods by a factor of 30 or 50. “Not just the rate but the number or type of errors that it can experience are smaller,” he says.

Qubits need to be flexible

Above all, the most refined and athletic qubits are the ones that are going to be more flexible. The ability to operate quantum computers at room temperature, for example, is a particularly enticing possibility that would give qubits more flexibility. And the more receptive qubits are to being guided by lasers, the more amenable they’ll be to entanglement.

“You want the qubits to be docile and go where they are led,” Yunger Halpern says. “This is maybe more of a characteristic of a show dog than an Olympic athlete.”

Techniques for adding flexibility to these systems vary tremendously: From understanding the relationship between entropy and information (which could affect how engineers understand thermodynamic processes in quantum situations) to using different methods of entanglement, scientists are training qubits to reach and surpass their expected limits. 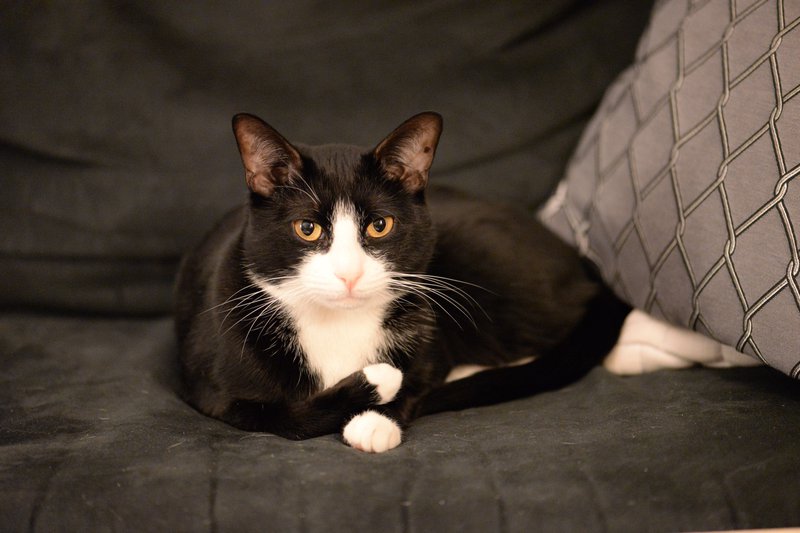 This cat’s name is Qubit. He may not be an Olympic athlete, but the author thinks he’s a pretty Great Qubit. | Photo courtesy Amanda Gefter and Justin Smith

“There are always going to be physical challenges with a quantum computer,” says Ashley Montanaro, a quantum computation researcher at the University of Bristol. “But when you scale up, as long as the noise [that the qubits] have to contend with doesn’t increase too much, you’ll be able to have a system that’s a thousand or one million qubits.”

Scientists are slowly, incrementally making their way toward that goal. And in the process, these little qubits could help solve some universal puzzles.

“The transition from truly quantum behavior to behavior that can be described as classical mechanics has been mysterious for a long time,” Yunger Halpern says. “I hope that as our quantum systems grow, we’ll be able to use them more and more to probe the crossover.”