Quantum Week at Yale geared toward novices and experts alike 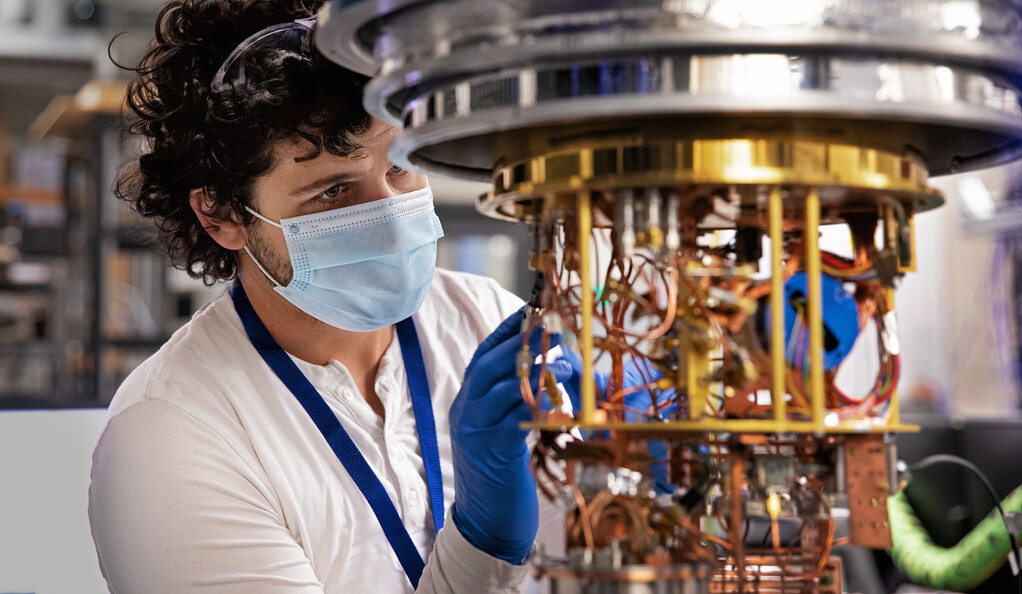 Yale’s hub for quantum research will soon entangle the campus — in the best possible sense — in a full week of mind-bending science, artistry, and discussion devoted to the wonders of quantum research.

Quantum Week at Yale, organized by the Yale Quantum Institute (YQI), will feature a hackathon, a lab tour, a movie screening, a record launch party, hands-on computer programming, a superconductive jewelry display, and an assortment of quantum-related library and museum exhibits.

The activities begin April 8 and run through April 14. A full list of events is available here.

“Yale’s quantum scientists are at the very top of this field,” said Florian Carle, YQI manager and coordinator for the event. “We want to take some of the excitement we see in the labs and at YQI and share it with the rest of the campus.” 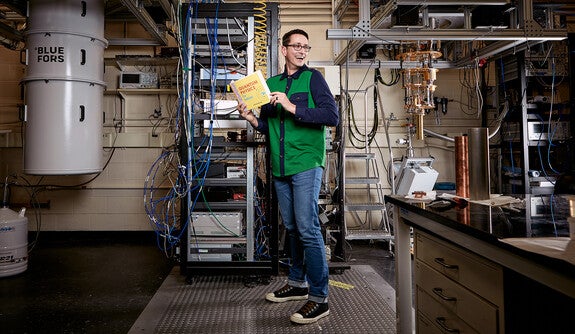 Florian Carle, manager of the Yale Quantum Institute, is the organizer for Quantum Week at Yale events. (Photo by Lotta Studio)

Quantum science delves into the physical properties that explain the behavior of subatomic particles, atoms, and molecules. Over the past century, quantum research has transformed disciplines as diverse as physics, engineering, mathematics, chemistry, computer science, and materials science.

Over the past 20 years, Yale researchers have propelled quantum research, particularly in quantum information science and quantum computing, with a series of groundbreaking discoveries — including the first demonstration of two-qubit algorithms with a superconducting quantum processor.

Yale’s research has led to unprecedented control over individual quantum objects, whether those objects are naturally occurring microscopic systems such as atoms, or macroscopic, human-made systems with engineered properties. Researchers say these advances may soon enable them to perform otherwise intractable computations, ensure privacy in communications, better understand and design novel states of matter, and develop new types of sensors and measurement devices.

“This is the time when computer scientists, mathematicians, physicists, and engineers are all coming together,” said Yongshan Ding, assistant professor of computer science, who will lead a programming workshop on April 14 that shows visitors — including those without any experience with quantum computing — how to “play” with quantum interference patterns.

“People can just code away,” Ding said. “My vision is that by exposing people to these activities, we can build a quantum-native programming language. This is a new paradigm of computation, so we’re going to need new ways to program for it.”

YQI has partnered with 18 Yale departments and centers to create 23 events for Quantum Week at Yale. One of the challenges in organizing the week, Carle explained, was developing an engaging mix of activities suited for both experienced researchers and quantum science novices.

To that end, the week is organized around four components: Understanding Quantum, Art & Quantum, Career and Entrepreneurship, and For Researchers.

The hands-on programming event, for example, comes under the “Understanding Quantum” banner. Other include an April 9-10 Quantum Coalition Hack, hosted by the Yale Undergraduate Quantum Computer Club; an April 11 tour of superconducting qubit laboratories; and a quantum-related exhibit of rare books at the Beinecke Rare Book and Manuscript Library on April 11.

“We’re always looking for ways that our libraries can engage with the academic work going on at Yale,” said Andrew Shimp, who consulted on Quantum Week events at Yale libraries. Shimp is Yale’s librarian for engineering, applied science, chemistry, and mathematics. “One of the unique things a Yale library can offer is the chance to view rare collections that aren’t necessarily digitized yet.”

Under the “Art & Quantum” heading, there will be an April 8 screening of the 2013 indie thriller “Coherence;” a visual arts competition called “Visualize Science” hosted by Wright Lab on April 13; a launch party for Quantum Sound (a record project begun at YQI in 2018) on April 13; a display of “Superconductive Jewelry” throughout the week at YQI; a “Quantum and the Arts” exhibit all week at the Arts Library; an April 13 event hosted by the Yale Schwarzman Center devoted to historical preservation of technology ephemera, called “Dumpster Diving: Historical Memory and Quantum Physics at Yale”; and a new exhibit at the New Haven Museum, “The Quantum Revolution,” that opens April 13 and features drawings by former YQI artist in residence Martha Willette Lewis. 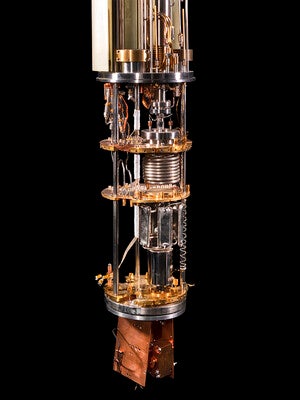 Badger, the dilution refrigerator that ran the first two-qubit algorithms with a superconducting quantum processor. (Photo by Jessica Smolinski)

Carle is curator for the New Haven Museum exhibit. “We wanted to show the evolution of quantum science at Yale,” he said. “It will take people from some of the first qubits in 1998 to ‘Badger,’ the dilution refrigerator that ran the first two-qubit algorithms with a superconducting quantum processor in 2009.”

The week’s “Career and Entrepreneurship” component will include a discussion of quantum startups hosted by The Tsai Center for Innovative Thinking at Yale (Tsai CITY) on April 12; a conversation with IBM’s Mark Ritter on the global implications of quantum research, hosted by the Jackson Institute for Global Affairs on April 12; a session on how to access market research for major industry analysts, hosted by the Yale University Library, on April 12; and a series of panel discussions on how to join the quantum workforce.

Finally, the “For Researchers” component of Quantum Week at Yale will feature a quantum sensing workshop at Wright Lab on April 8; and an April 14 lecture by quantum researcher Nathan Wiebe of the University of Washington.

“The final day for Quantum Week at Yale, April 14, also happens to be World Quantum Day,” Carle said. “Our hope is that by then, students all over campus will be aware of quantum work being done here — and want to explore it themselves in some way.”

By Jim Shelton for Yale News