“The Quantum Revolution” Lands At The New Haven Museum 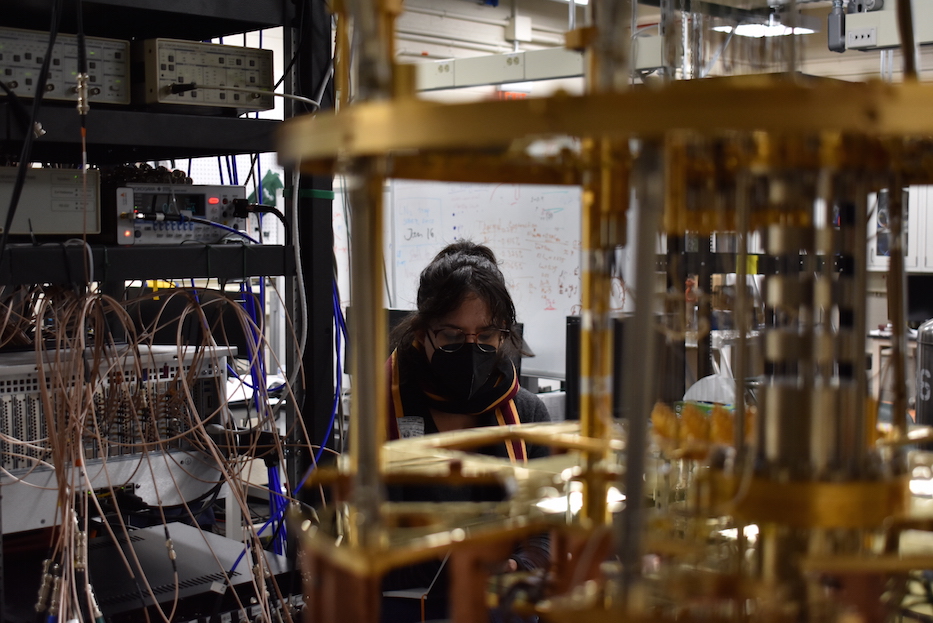 At the opening night of The Quantum Revolution: Handcrafted in New Haven, the second floor of the New Haven Museum hummed with visitors. There were physicists and mathematicians, longtime New Haveners, friends of the curator and artist.

The literal spotlight, however, was on Badger, a cryogenic dilution refrigerator that stands upright in the center of the exhibition space. Colloquially known as a “fridge,” Badger can cool to roughly -459 degrees Fahrenheit, known as absolute zero—colder than outer space. Badger is a slim cylinder, approximately five-feet tall, dull metal, and propped upright by a graphite-colored frame.

Lewis was the 2017-2018 Artist-in-residence at the Yale Quantum Institute. The opening coincided with the 2022 Quantum Week at Yale, which ran from April 8 to 14. 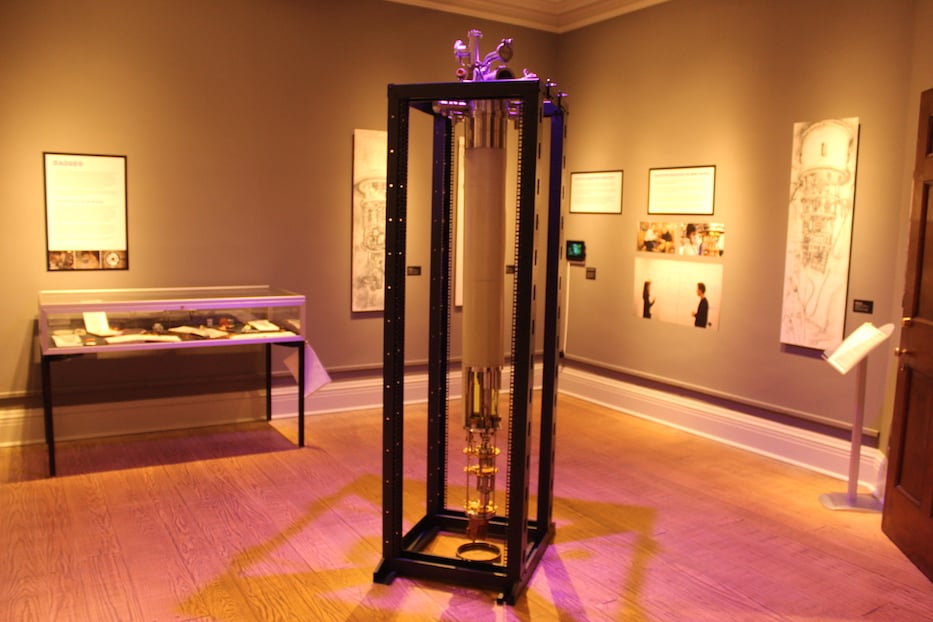 Badger, the star of the show. Al Larriva-Latt Photo.

“It turned out that the history of YQI really hasn’t been documented at all, and quite important because it’s made right here.” Lewis said at an opening reception earlier this month. “It’s a lot of handwork, and it’s technology that everyone else is going to be using.”

Part of the show is New Haven’s quantum history. In 2009, researchers at Yale’s Becton Lab made history when they placed a two-qubit experiment inside of Badger, preparing the experiment to run an algorithm to complete a complex task. One of the tasks the algorithm completed was called the “reverse phonebook experiment.” When given a phone book with four potential phone numbers for a specific person—only one number was correct—the algorithm was able to test all the numbers and place a call to the correct number all at the same time.

It demonstrated a key property of quantum atoms called superposition: the ability to be in “on” and “off” states simultaneously. The first-ever two-qubit experiment ran successfully, marking a milestone in quantum computing history.

A qubit, otherwise known as a superconducting quantum bits, is a processing device designed to mimic the bizarre behavior of quantum atoms. These qubits are the foundation of the quantum computer, which runs using the properties of quantum atoms. Critically, the qubit requires temperatures of absolute zero to operate–requiring them to be placed in fridges. The quantum computer is distinct from the classical computer, which processes information using binary zeros and ones and which first became available to the public for commercial purchase in the late 1970s. 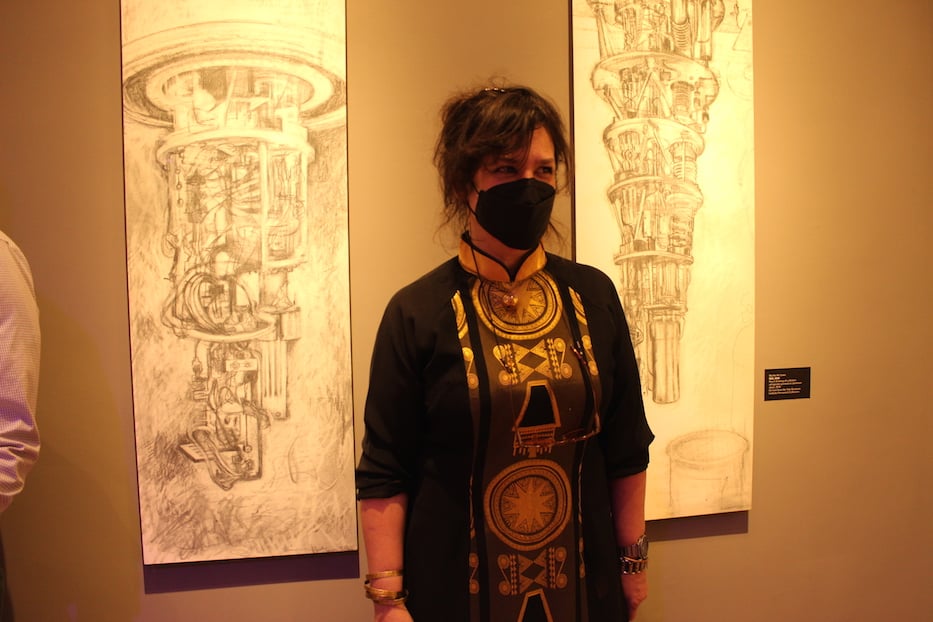 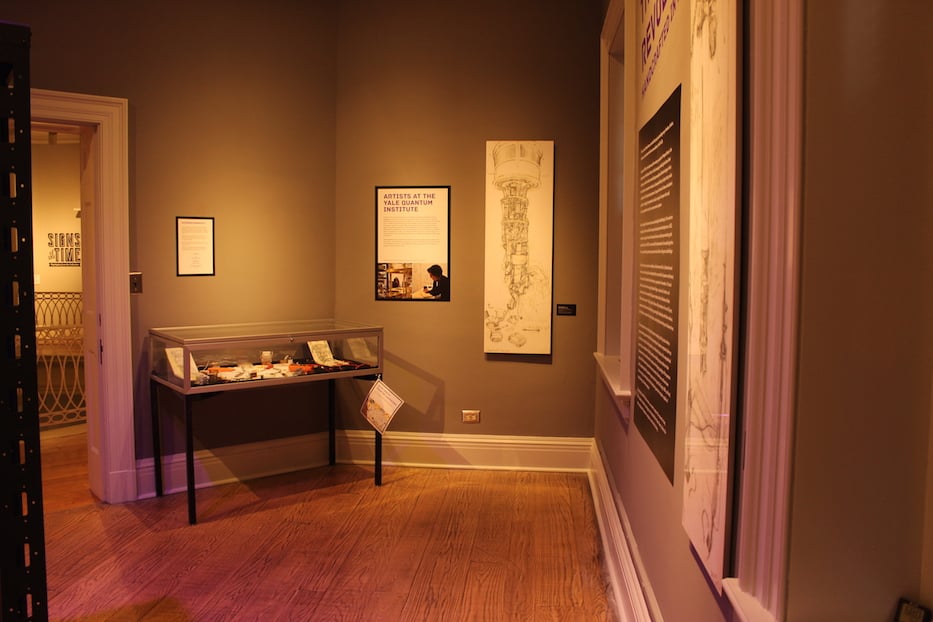 Top: Lewis during an opening reception earlier this month. Bottom: The exhibition at the New Haven Museum. Al Larriva-Latt Photos.

Researchers theorize that quantum computers might ultimately have the power to complete computing processes–such as airline scheduling or weather forecast modeling–that binary computers lack the capability to tackle. Right now, that development is a long way off. But tracing the rapid evolution of binary computers from full-room machines into hand-held devices, researchers hold out hope that the evolution of quantum computers will follow suit, arriving sooner rather than later.

The exhibition narrates this early point not only in quantum computing history, but also New Haven history. It also draws the connections between the tinkering, experimenting, and creativity in art and in computing. It’s kind of like what would happen when you put an artist, a scientist, and a historian in the same room, Bischoff-Wurstle said at an opening last Wednesday.

The struggle of working in a lab like Becton, home to heavy-duty equipment in almost constant operation, is that the work is difficult to bring to the public. As curator, Carle chose to narrate a history grounded in physical parts by putting tangible materials on display.

Inside the glass display case closest to the exhibition entrance are the basic tools of quantum mechanics—the same tools one might find in an electrician’s toolkit. There’s an electrical wire sheathed in blue plastic insulation, a roll of copper sheeting, a bright orange box cutter, and a hand-held multimeter—the same kind electricians use. Nuts and bolts are scattered throughout. 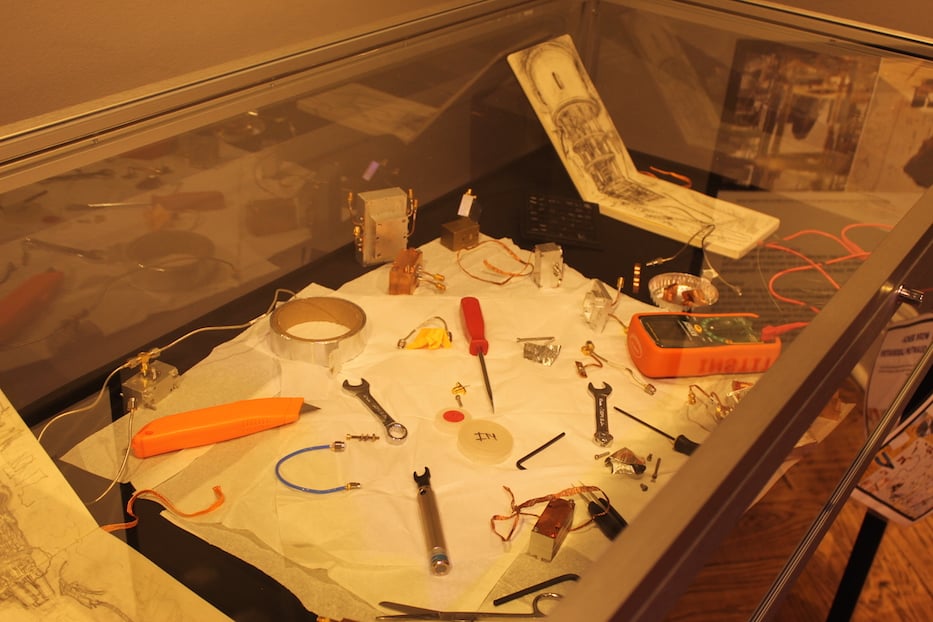 These tools are used to construct qubits, the essential components of the quantum computer. Nestled inside the second glass display case, on the far end of the exhibition space, is a “zoo” of qubit prototypes, including “Jellyfish” and “Hippopotamus.” Both were invented in 1998 by physicist Robert Schoelkopf.

The first qubits were large, with visible hand-wired components. One such qubit is RFSET (Radio Frequency Single Electron Transistor), which Schoelkopf also fabricated in 1998. A disk with bright silver screws soldered in increments around its border. Strips of copper radiate to the edges of the disc. In the center is a square chip, with 14 smaller squares inside of it.

Compare that qubit to “Processed wafers of resonators prior to dicing,” designed in 2003 by the Schoelkopf group.  “Processed wafers” is a translucent black glass inside of which are three parallel strips. Nested within each strip are over a dozen small boxes. Just five years after the invention of RFSET, “processed wafers” has as many times the computing power at just a fraction of the size. Each of those boxes on surface, Carle said, is equivalent to the entire RFSET chip.

Amongst the zoo of qubits is a mesmerizing variety of geometric shapes and patterns. Each is a prototype that researchers have tested. The lessons from each experiment have been adapted and appropriated in the long, ongoing evolution of quantum computing. 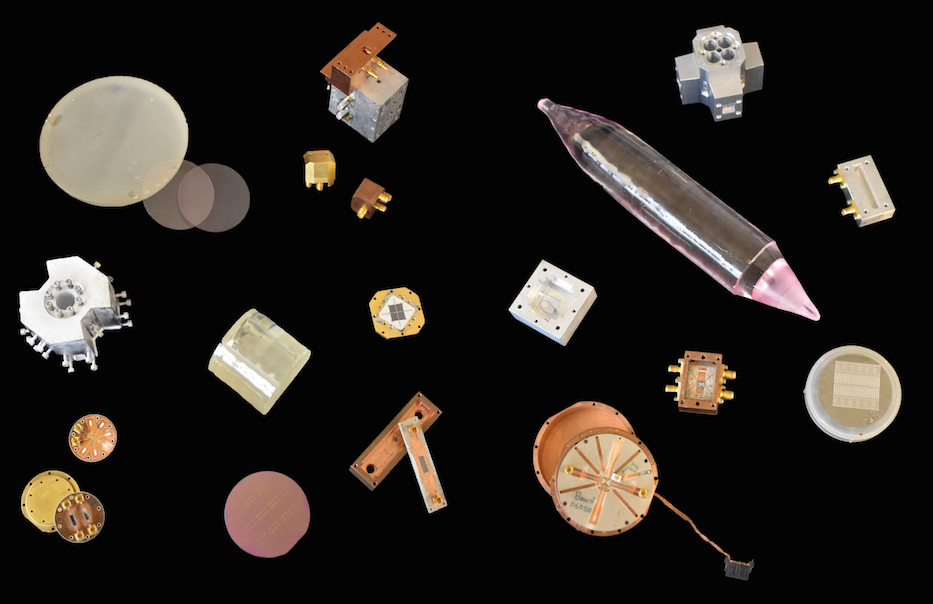 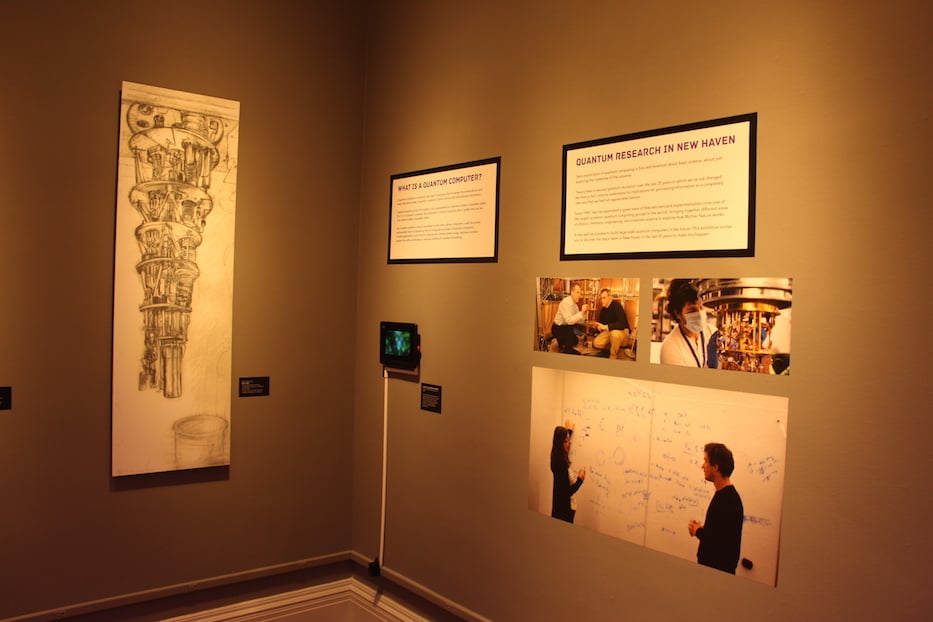 The aesthetics of the qubits and fridges appealed deeply to Lewis. In one of her most recent projects at YQI, exhibited in conjunction with the International Festival of Arts & Ideas, she designed an immersive installation called “I’ll be your qubit.” Visitors stepped inside a ring of translucent white curtains to find themselves inside an artistic representation of a cryogenic dilution refrigerator. Throughout the room were interactive toys, including nine motion-sensor-activated flipbooks, which demonstrated basic quantum properties.

“The minute I went down to the labs I wanted to keep going down to the labs. It’s really compelling,” Lewis said. “The shininess of the materials, the beauty of the machines, the sort of mysteriousness of all of it.”

The main feature of the exhibition is Lewis’ sketches of the fridges, which Carle refers to as “portraits” (the affectionate anthropomorphizing of equipment is a practice in the Becton lab). Lewis completed this series from 2017 to January 2021; each sketch took place in one sitting with minimal editing afterward.

Some are on display in their original form, on the pages of hard-cover bound sketchbooks. Others have been scanned and printed into long aluminum sheets and hang around the room. The sketches are done in graphite, rendered with thin lines and a painstaking attention to detail. There’s a stillness to the machines, a silent dignity. They become monuments to creativity, collaboration, and a passion for thinking beyond what’s currently possible. 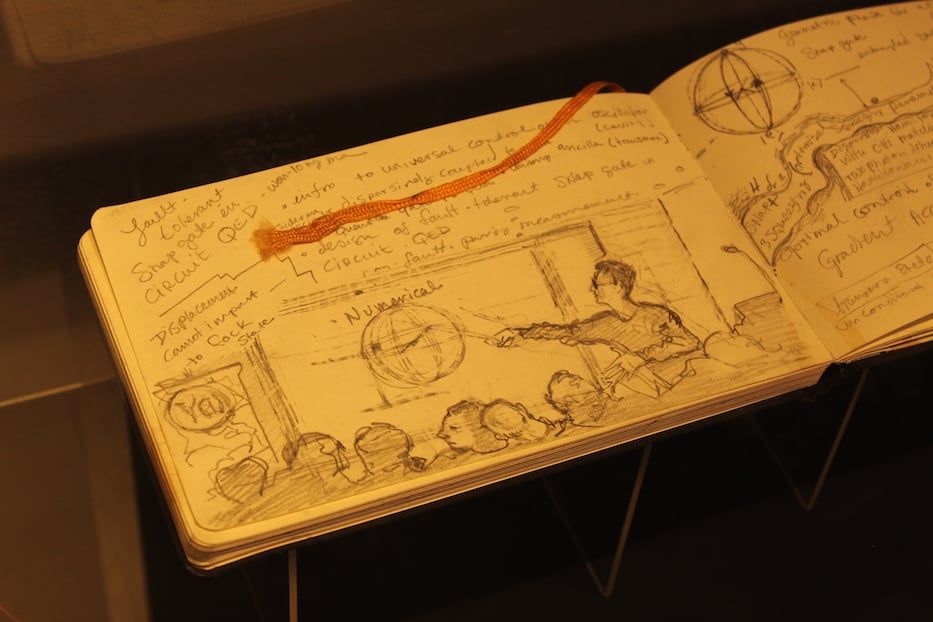 Taken together, the sketches display the evolution of the fridges, which in contrast to the qubits, have gotten bigger and able to hold more qubits at once. The fridge parts, once available through tinkering by hand, are becoming industry standard and commercial purchase by companies like Google, IBM, and Intel. Lewis’ sketching–made possible by her exclusive access to Becton–provides the viewer with a special-access glimpse into this unfolding history.

Her sketches also draw parallels between fine art and science, reminding the viewer that like her handmade sketches, the fridges are also handcrafted. Almost every single part in the fridge prototypes has been assembled by hand.

For Lewis, getting to work in Becton was revelatory. Normally, she works as a solitary artist in the studio. Here, the YQI gave her  access to a dynamic network of researchers. She recalled the sheer volume of communication throughout the day. People were gathered in pairs and in groups, talking, hashing out concepts, theorizing.

She was especially struck by the amount of hand labor that goes into it. 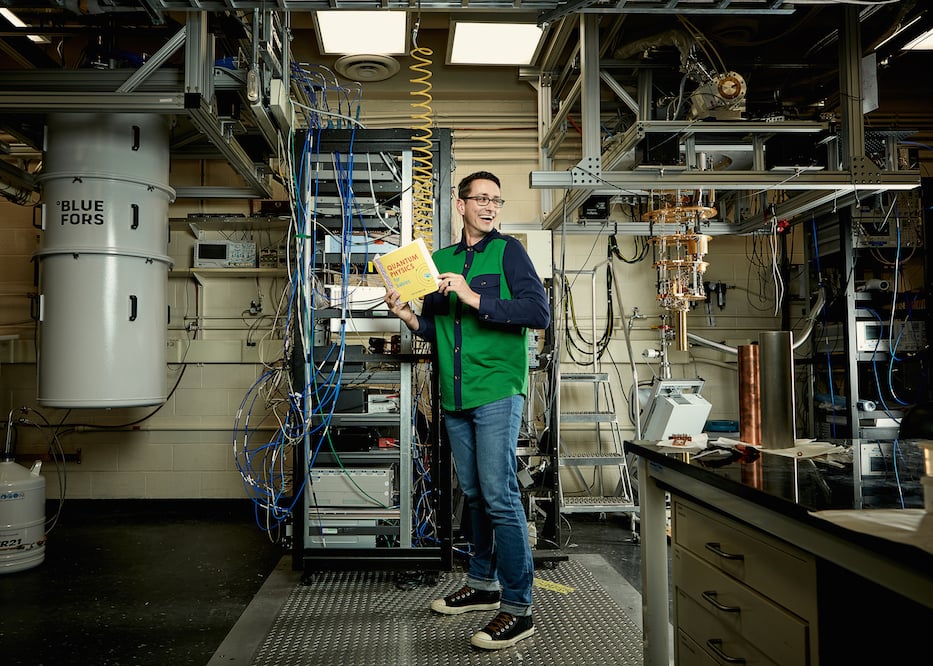 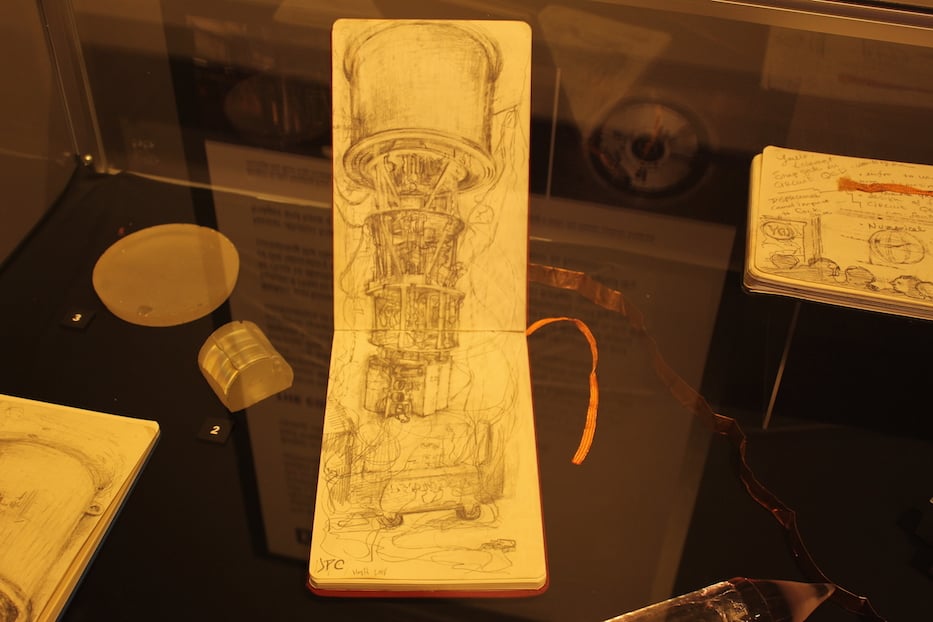 “YQI is full of whiteboards, and there’s not a conversation that takes place that doesn’t have them standing there with markers, drawing diagrams and mathematical formulas,” Lewis said. “They’re constantly talking with their hands.”

During a winter storm in January 2022, an opportunity arose. A cryogenic dilution refrigerator that researchers refer to as Frozone (yes, after the Incredibles superhero) had broken and was going to be repaired. Frozone usually operates for weeks at a time at absolute zero, sheathed by a metal canister. The impending repair meant that it would be visible for her to sketch. Despite the cold, Lewis trekked over to Becton to sketch Frozone, completing the final sketch in her series of fridge portraits.

In the sketch, Frozone is suspended from the ceiling, and seems to unfold like an accordion of discs. These discs lie below each other, one on top of the other, buttressed by thin cylindrical columns.  Around the cylinders are complex coils of wiring. Frozone’s features are a perfect challenge for an artist to capture: there is an immensity in scale and in fine detail.

“Certainly, the more profound lessons are kind of eking their way into my work, and it would be harder for me to verbalize those,” Lewis mused. “It’s about process, and the enormity and tininess of things at the same time.”

The Quantum Revolution: Handcrafted in New Haven runs through Sept. 16 at the New Haven Museum. More information is available here.