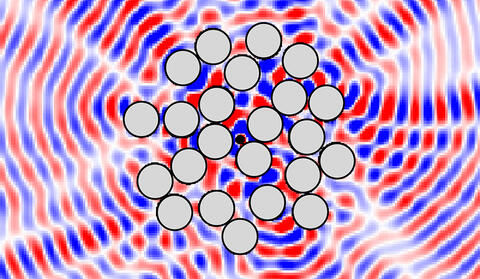 At the heart of that research is symmetry, properties of a structure that are unchanged when viewed in different ways, such as in a mirror or when rotated by 90 degrees.

Symmetries have a profound effect on how waves — such as sound waves and light waves — propagate in natural and artificial materials. That’s why scientists in an array of disciplines are working to understand symmetries and symmetry breaking in order to design new materials with exotic wave properties and develop new tools for wave manipulation.

Yale’s A. Douglas Stone, the Carl A. Morse Professor of Applied Physics and Physics, is a principal investigator for a new, multi-institution research collaboration that will explore wave properties and symmetries. The four-year, $8 million Simons Collaboration on Extreme Wave Phenomena Based on Symmetries will bring together concepts in applied mathematics, theoretical and computational physics, modern optics and photonics, and acoustics.

Stone, who is also deputy director of the Yale Quantum Institute, spoke with YaleNews about symmetries research and the new grant.

What is the mission of the Simons Collaboration grant program?

The Simons Foundation is unusual in that a major part of its mission is to support research in mathematical and quantitative sciences. James Simons, the founder, was a world-class mathematician at Stony Brook University before leaving in the ’80s to start one of the most successful mathematical and algorithm-oriented hedge funds in the world. In general, the foundation supports activities that build community in STEM fields, and specifically with the Simons Collaborations, they try to create synergy between researchers at various institutions, focusing on a broad frontier area that is showing exciting progress and can bring together researchers from multiple disciplines.

What is Yale’s role in the collaboration?

This collaboration involves applied mathematicians, physicists, engineers, and people working with electromagnetic, acoustic, and mechanical waves. Yale’s involvement is primarily in the field of optics or electromagnetic waves.

One idea developed here, starting in 2010, is that of coherent perfect absorption — also called the anti-laser — which fits perfectly into the theme of extreme wave phenomena based on symmetry. This theory implied that any structured material, no matter how complicated, can be illuminated with a special kind of input wave that will be trapped perfectly by the structure and ultimately completely absorbed by it.

How many people and laboratories here on campus will be involved?

My research group received funding, but there could be experimental or technological implications of the research that could draw in a number other groups, such as Hui Cao in applied physics or Jack Harris in physics.

What do we mean by “symmetries” and “symmetry breaking,” in this context?

We are always thinking of waves as interacting with some kind of material structure, which may have some kinds of symmetry, such as a geometric symmetry, which looks the same when reflected through some central point or plane. The coherent perfect absorber exploits the idea of time-reversal symmetry — that if one ran time backwards, the observed process could also exist. In that specific case the process that we imagine running backwards is the emission of light from a laser. Symmetry breaking occurs when a structure is deformed and no longer has a particular symmetry in space or time. However, even more interesting is “spontaneous” symmetry breaking. Physicists love this. The symmetry still exists, but a particular wave solution fails to respect that symmetry, only the whole set of solutions does. Exactly at the point at which the solutions stop respecting the symmetry, the system becomes hyper-sensitive to any disturbance. Then the fun begins.

Many of the topics sound very abstract and technical… [but] there is always a good chance a deeper understanding can lead to some useful devices.

Are there practical applications you can see coming out of the project?

Definitely. One member of the collaboration has already pioneered hand-held ultrasound scanners; others are working on how to get perfect reception of signals in a noisy environment or how to toggle between different receivers in a noisy environment. Of course, many of the topics sound very abstract and technical, but because they involve the kinds of waves already prevalent in technology, such as sound and electromagnetic waves, there is always a good chance a deeper understanding can lead to some useful devices.

How does the Simons Collaboration fit into Yale’s ongoing research in applied physics and materials science?

Optical physics and engineering and materials has been a major growth area at Yale in recent decades with eight or nine active groups spanning applied physics, physics, and engineering. When I came to Yale, there were perhaps four or five groups. Many of the topics of the collaboration also resonate with work in several of these groups.