A fault-tolerant system for stopping ‘leaks’ in quantum computers 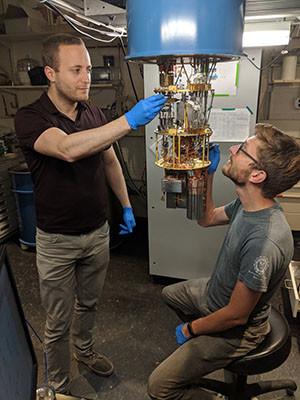 Large-scale quantum computers are still years away, but it is well known that they will need error correction. All of the components in a quantum computer are connected in a fragile, entangled state that allows a quantum computer to solve problems that would be impossible on a classical computer. Because of this entanglement, an error in just one bit of quantum information, called a qubit — or even the act of measuring a qubit — can collapse the entire enterprise.

Unfortunately, researchers say, the process of correcting errors is itself faulty and can further corrupt the information contained in qubits.

“The only way a quantum computer can work is if its ‘logical’ qubits are constantly monitored by ‘ancillary’ qubits, which ensure logical errors are detected and corrected before they can affect the computation,” said Yale postdoctoral associate Serge Rosenblum, co-lead author of a new study published in the journal Science.

“Using this method, the chance of catastrophic failure during error detection has been reduced by a factor of five,” Rosenblum said.

Co-lead author Philip Reinhold, a graduate student, said fault tolerance “essentially amounts to making a robust system out of faulty parts. It opens the way for error correction that increases the fidelity of quantum computation.”

Rosenblum and Reinhold work in the Yale lab of Robert Schoelkopf, the study’s principal investigator.

Additional authors of the study are Liang Jiang and Luigi Frunzio from Yale and Mazyar Mirrahimi from the French Institute for Research in Computer Science and Automation.

This research was supported by the U.S. Army Research Office.