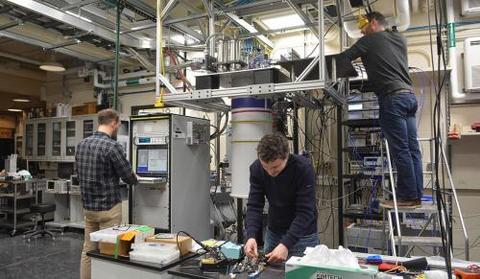 Yale’s next wave of quantum computing research will get a boost from a $16 million grant from the U.S. Army Research Office.

The four-year grant will help fund the work of dozens of faculty members, graduate students, and postdoctoral researchers affiliated with the Yale Quantum Institute. The grant also will help pay for a variety of specialized technical gear, including electronics and cooling equipment.

The goal: To construct a “nearly perfect quantum computer out of imperfect parts,” according to the researchers.

“This is further recognition of Yale’s world-leading position in solid-state quantum computing and quantum information science,” said A. Douglas Stone, the Carl A. Morse Professor of Applied Physics and Physics, and acting director of the Yale Quantum Institute. “The level of funding this program has achieved in the last decade is unprecedented in the physical sciences at Yale. It’s the largest synergistic research effort I’ve seen in my 30 years here.”

The Yale Quantum Institute brings together researchers and staff from around the university. The institute’s mission is to unify Yale’s many research areas in quantum science, with a particular emphasis on potentially revolutionary methods for information processing, storage, and security.

The new grant comes at a time when Yale is prioritizing quantum science research as part of an overall emphasis on science. The University Science Strategy Committee (USSC) recently recommended quantum science, engineering, and materials as one of the top priority ideas for investment in the next decade. The USSC urged the expansion of existing Yale quantum efforts at a scale that will attract international attention and place Yale in a position of broad intellectual leadership.

“We’re pursuing a way of building a quantum computer and doing error correction that is different than anyone else,” said Girvin, the Eugene Higgins Professor of Physics. “It’s a different architecture, and our approach to error correction does not follow the traditional route.”

Quantum computing has the potential to dramatically impact a range of industries and fields of academic study that hinge on computation. A fully functional, practical quantum computer would offer the possibility of computation speeds that are many orders of magnitude faster than today’s best conventional supercomputers.