Fall courses of interest for YQI Students and Postdocs 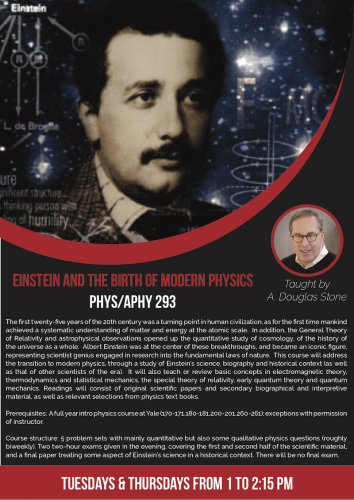 Several YQI faculty members are teaching a course related to quantum science this Fall. If you are interested in attending one or several courses, check out courses.yale.edu if you are an enrolled student, or contact the instructor if you want to audit the class.

Einstein and the birth of modern physics - PHYS 293/APHY 293

The first twenty-five years of the 20th century was a turning point in human civilization, as for the first time mankind achieved a systematic understanding of matter and energy at the atomic scale. In addition, the General Theory of Relativity and astrophysical observations opened up the quantitative study of cosmology, of the history of the universe as a whole. Albert Einstein was at the center of these breakthroughs, and became an iconic figure, representing scientist genius engaged in research into the fundamental laws of nature. This course will address the transition to modern physics, through a study of Einstein’s science, biography and historical context (as well as that of other scientists of the era). It will also teach or review basic concepts in electromagnetic theory, thermodynamics and statistical mechanics, the special theory of relativity, early quantum theory and quantum mechanics. Readings will consist of original scientific papers and secondary biographical and interpretive material, as well as relevant selections from physics text books.
Prerequisites: A full year intro physics course at Yale (170-171,180-181,200-201,260-261); exceptions with permission of instructor.
Course structure: 5 problem sets with mainly quantitative but also some qualitative physics questions (roughly biweekly). Two two-hour exams given in the evening, covering the first and second half of the scientific material, and a final paper treating some aspect of Einstein’s science in a historical context. There will be no final exam.

On-line, complete set of lecture notes – Homework: Series of exercises No exams, only a presentation based on a final mini-project

Graduate-level course on statistical physics of open systems, treating both classical and quantum regimes.
In his work on Brownian noise, Einstein unveiled one corner of a very fundamental law of Physics. This law links three properties of any physical system coupled to a “reservoir”: a) its random fluctuations (noise) when in true static equilibrium, or in dynamic, steady-state equilibrium, b) its response to a small external perturbation, which can be passive (dissipation) or active (amplification) and c) the temperature of the reservoir (usually positive but sometimes negative). After having covered the basic notions in the description of noise, we will treat the different formulations of this law, also known as the fluctuation-dissipation theorem (FDT), in both the classical and quantum regime. The treatment of noise in practical physics measurements will be central. In particular, we will discuss how noise can sometimes contribute positively to measurements rather than just degrade them: Examples include spin relaxation in nuclear magnetic resonance (motional narrowing), Johnson-Nyquist and Shottky noise in solid state transport physics (noise thermometry, exploration of mesoscopic processes through their noise), photon correlation measurements in quantum optics (Hanbury Brown-Twiss experiment). The ultimate precision of a measurement, and its eventual back-action on the measured system, will be treated in the last part of the course.
Topics covered by the course include:
1. Frequency domain as a resource: signal filtering, analog-digital conversion, Nyquist sampling theorem, wavelets, modulation and demodulation techniques. Transmission lines. Traveling modes. Stochastic functions. Noise power spectral density. Autocorrelation function. Wiener-Kinchin theorem. Black-body noise. 1/f noise. Shannon’s information capacity.
2. Brownian-like noise in mechanical and electrical systems: The Einstein relation. Langevin equation for a free particle and a particle in a field of force. Johnson-Nyquist noise of a resistance. Fokker-Planck equation. Approach to the Boltzman distribution. Kramers’ problem and the Arrhenius law.
3. Response theory, classical and quantum: generalized susceptibilities, reactive and dissipative response, stability, causality, reciprocity/non-reciprocity, invariance with respect to time translation and reversal. Kramers-Kronig theorem. Nyquist and Caldeira-Leggett models of resistors. Kubo formula. Master equation. The quantum fluctuation-dissipation theorem. Link between absorption, induced emission and spontaneous emission. Input-output theory.
4. Linear amplifiers: current, voltage and power gains, input and output impedance, voltage and current noise, noise impedance, noise temperature. The standard quantum limit. Link with Heisenberg’s microscope. Quantum non-demolition measurements and back-action evasion. Stochastic master equation. Shot noise and other non-equilibrium noises. Dynamical cooling.
Pre-requisites: Undergraduate quantum physics, electromagnetism and statistical physics.

I intend to concentrate on the basic notions and phenomena rather than on details of various techniques, and aim to cover topics in:
*one-dimensional quantum fluids of fermions, bosons, and spins *quantum impurity physics: Fermi-edge singularity, Kondo effect,
and Coulomb blockade of Dirac and Majorana fermions *edge states transport in topological insulators *interaction effects in disordered and chaotic systems *elements of many-body localization theories
*elements of the topological condensed matter classification
The prerequisite for the course is the knowledge of elementary quantum mechanics and statistical physics (this course may be taken in parallel with Stat Mech II).
Light homework will provide the basis for the course grade.