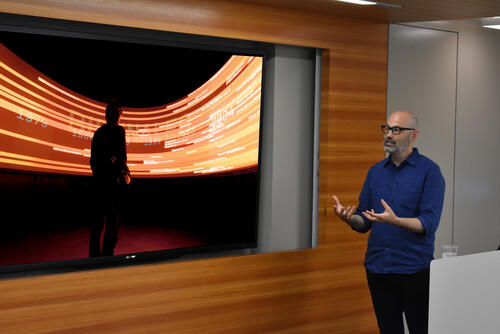 After the success of Yale’s “Quantum Week” (Spring 2022)—which showcased the artworks of our previous YQI artists in residence such as the art and science museum exhibition “The Quantum Revolution” featuring artwork by Martha W Lewis, and the light show performance and release of the album “Quantum Sound” by Spencer Topel—the Yale Quantum Institute continues its involvement at the intersection of art and science by welcoming digital artist and virtual reality technologist, Stewart Smith, for the academic year 2022–2023.
Stewart has a long history of operating at the intersection of art and science, from creating digital artworks in collaboration with the Center for Art and Media (ZKM) in Germany, to working within Google’s Creative Lab and Data Arts Team, to his current role as Head of Consumer Augmented Reality at Unity Technologies where he’s helping to craft the future of augmented and virtual reality creation.
Although Stewart taught himself to program computers at a young age, he pursued an academic interest in art rather than computer science, receiving his MFA in graphic design from Yale University. Stewart’s artworks have been exhibited at the Museum of Modern Art in New York, ZKM in Germany, the SFMOMA in San Francisco, and is in the permanent collection of the Fondation Cartier in Paris. Over the past few years he’s taken a deep interest in quantum computing—teaching himself the logic of quantum circuits by building Q.js, an open-source, browser-based quantum circuit composer and circuit simulator. (Try it live here: https://QuantumJavaScript.app)

Earlier this summer, Stewart gave a public talk about his work and practice at YQI titled “For the Hapless Dreamers: Digital Art meets Quantum Simulations” as part of our nontechnical talks series.

What really makes him happy is partnering with smart friends to take on the impossible—or the ridiculous. We are delighted he’s agreed to join YQI as an Artist in Residence.
In this role, Stewart will interact with our faculty members, researchers, and students, attend our colloquia and events, and produce digital artwork based on the work of, and in collaboration with, YQI researchers.
Additional public events will be hosted at YQI to showcase the work that Stewart and the YQI members will create during the residency. To be informed of the upcoming events, consider subscribing to the YQI public events newsletter or check our calendar. To learn more about our artist-in-residence or our previous artists, visit art.quantuminstitute.yale.edu.