A fellowship on Topological States in Coupled Double Nanowire Superconductor Hybrids for an experimental PhD thesis work is now available in the Nano- and Quantum Electronics group at the Department of Physics of the University of Basel: www.nanoelectronics.ch

Our current projects are strongly motivated by the recent excitement about topological phases and Majorana bound states (MBSs) that can emerge in hybrid devices in low dimensions, for example in semiconducting nanowires (SNWs) with strong spin-orbit coupling coupled to a superconductor (SC). The combination of time-reversal symmetry breaking, induced by a magnetic field, spin-orbit field and superconducting pairing can give rise to new states of matter with non-trivial topological phases and unconventional pairing. To unravel the emergence of MBSs, we develop new probes with which the proximity gap and proximity-induced bound states (Andreev-, Shiba states) can be tested. Our approach is based on measuring both DC and AC transport, the latter at GHz frequencies using reflectometry and noise probes. The present project goes even a step further, since we aim to investigate topological states in coupled nanowires. If in contact with a SC, non-local pairing between the wires can give rise to new states, so called Parafermions. These are also, similar to MBSs, non-abelian quasi-particles, which have been proposed as units for topological quantum computing. However. parafermions allow for a larger set of operations and are therefore more desirable than MBSs. Moreover, in double NWs coupled to SCs, non-trivial topological states may already emerge without having to break time-reversal symmetry.

We look for a highly motivated student (preferably a physicist) who is keen to explore fundamental aspects of quantum devices. You will design and fabricate your own devices using state-of-the-art micro- and nanofabrication technologies. The nanowires will be grown by a collaborator, but you will be involved in the future designs and characterizations not limited to electrical measurements. Electric measurements, on which you will focus on, will be done down to millikelvin temperatures and include DC to up to 6 GHz radiofrequency techniques based on modern cryogenic circuitry (for example rf-resonators) and cold amplifiers. All PhD fellows are expected to work in a team and collaborate with other PhD and postdoctoral fellows, as well as bachelor and master students joining the lab part of their time. Start of the project: Dec. 2017. Duration 3-4 years. Requirement: you need to have a profound understanding of quantum and solid state physics as it is taught in a physics curriculum.

To apply, please email to Christian.Schoenenberger@unibas.ch a short curriculum vitae including names and contact info of referees and scanned copies of grades. Please add a short statement (few lines only) on your motivation and your education / background in quantum physics and solid-state physics. 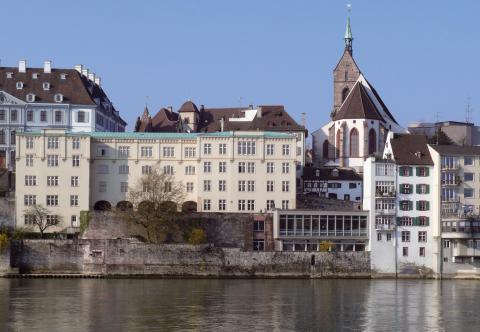