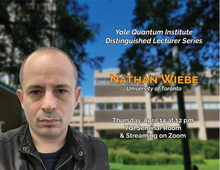 The Yale Quantum Institute Distinguished Lecturer recognizes a researcher whose work significantly advances quantum science, with emphasis on the areas of mesoscopic physics, nanoscience, quantum information, quantum computing and related theoretical and mathematical topics. For the 2021 Prize, YQI welcomes Nathan Wiebe from the University of Toronto in recognition of his groundbreaking work in theoretical quantum computer science.

Quantum Simulation has emerged within the last few years as arguably the pre-eminent application of quantum computation promising exponential improvements for problems in chemistry, materials and high energy physics.  Despite the massive progress seen within the last several years, we have only just started developing algorithms that can tear apart the structure of problems to render their simulations practical.  In this talk I will review the developments that my coauthors and I have made to reduce the cost of simulation by over five orders of magnitude.  I will further discuss a new approach to quantum simulation that takes a different approach to simulation.  Rather than approximating a time-dependent Hamiltonian with a time-independent Hamiltonian, we will consider the opposite.  I will show that this can actually provide in some cases an exponential advantage over the best known simulation methods and enable practical simulations of constrained Hamiltonians.  Specific examples involving quantum field theory will be discussed.  This shows that quantum algorithms that are restricted to only use time independent Hamiltonians, such as qubitization, are by default at a disadvantage.  As a final example, we will show a new clock construction that allows us for the first time to make any time-dependent simulation algorithm simulate a time-dependent Hamiltonian at modest cost.  This not only provides a technique for simulating Hamiltonians, but also gives a new method for developing time dependent simulation methods that uses this clock construction as a temporary construct that is introduced and discarded to allow us to translate simulation methods over to a time-dependent formalism without ever explicitly requiring the clock ever be constructed.

This event is part of Quantum Week at Yale. See the full program here.

Livestream the event on Zoom