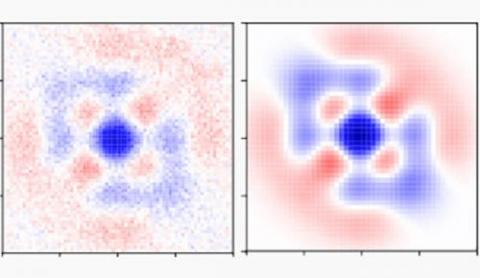 One of the key concepts in quantum physics is entanglement, in which two or more quantum systems become so inextricably linked that their collective state can’t be determined by observing each element individually. Now Yale researchers have developed a “universal entangler” that can link a variety of encoded particles on demand.

The discovery represents a powerful new mechanism with potential uses in quantum computing, cryptography, and quantum communications. The research is led by the Yale laboratory of Robert Schoelkopf and appears in the journal Nature.

Quantum calculations are accomplished with delicate bits of data called qubits, which are prone to errors. To implement faithful quantum computation, scientists say, they need “logical” qubits whose errors can be detected and rectified using quantum error correction codes.

“We’ve shown a new way of creating gates between logically-encoded qubits that can eventually be error-corrected,” said Schoelkopf, the Sterling Professor of Applied Physics and Physics at Yale and director of the Yale Quantum Institute. “It’s a much more sophisticated operation than what has been performed previously.”

The entangling mechanism is called an exponential-SWAP gate. In the study, researchers demonstrated the new technology by deterministically entangling encoded states in any chosen configurations or codes, each housed in two otherwise isolated, 3D superconducting microwave cavities.

“This universal entangler is critical for robust quantum computation,” said Yvonne Gao, co-first author of the study. “Scientists have invented a wealth of hardware-efficient, quantum error correction codes — each one cleverly designed with unique characteristics that can be exploited for different applications. However, each of them requires wiring up a new set of tailored operations, introducing a significant hardware overhead and reduced versatility.”

The universal entangler mitigates this limitation by providing a gate between any desired input states. “We can now choose any desired codes or even change them on the fly without having to re-wire the operation,” said co-first author Brian Lester.

The discovery is just the latest step in Yale’s quantum research work. Yale scientists are at the forefront of efforts to develop the first fully useful quantum computers and have done pioneering work in quantum computing with superconducting circuits.