Synopsis: Quantum Optomechanics in a Liquid 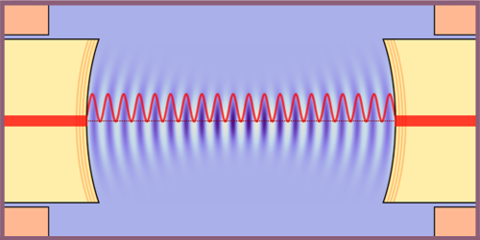 Quantum optomechanical effects have been observed for the first time using a liquid—superfluid helium—confined in an optical cavity.

In optomechanical experiments, researchers routinely observe quantum effects in macroscopic objects. Recent examples include the ground-state cooling of mechanical oscillators as heavy as hundreds of nanograms. To date, these demonstrations only involved solids or ultracold gases. Now, a team led by Jack Harris of Yale University and Jakob Reichel of the Kastler–Brossel Laboratory, France, has provided the first evidence of quantum optomechanical effects in a liquid—superfluid helium. The approach may allow researchers to explore novel optomechanical regimes in liquids and to answer outstanding questions on superfluidity.

The team used a cavity bound by the end faces of two optical fibers. Filled with superfluid helium, the cavity acted as a resonator for both optical waves and acoustic waves in the fluid—providing a way to couple light and vibrations. The researchers launched infrared laser light into the cavity from the fibers and, exploiting the optical-acoustic coupling, characterized the liquid’s acoustic vibrations by observing the outgoing light’s spectra. These spectra contained signatures of two quantum effects. First, the team observed signs of the liquid’s zero-point motion—fluctuations occurring in the ground state. Second, they saw signs of quantum back action—perturbation of the vibrations due to their measurement by the laser.

The setup could enable the manipulation of rotational degrees of freedom not present in solids and could also enable the study of superfluid turbulence, which can be a model for ordinary turbulence. As outlined by the team in a recent proposal, manipulating rotational degrees of freedom could allow the ground-state cooling of a levitated helium drop as heavy as a hundred micrograms. Weighing as much as an eyelash, this would be more massive than any object previously cooled to this state.

This research is published in Physical Review Letters.