The quantum computer factory that’s taking on Google and IBM 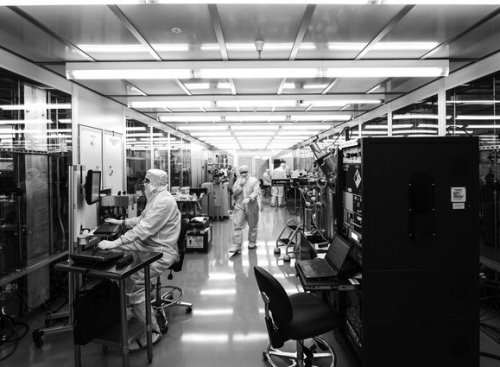 A few yards from the stockpile of La Croix in the warehouse space behind startup Rigetti Computing’s offices in Fremont, California, sits a machine like a steampunk illustration made real. Its steel chambers are studded with bolts, handles, and circular ports. But this monster is powered by electricity, not coal, and evaporates aluminum, not water—it makes superconducting electronics. Rigetti is using the machine and millions of dollars’ worth of other equipment housed here in hermetically sealed glass lab spaces to try and build a new kind of super-powerful computer that runs on quantum physics.

It’s hardly alone in such an undertaking, though it is the underdog: Rigetti is racing against similar projects at Google, Microsoft, IBM, and Intel. Every Bay Area startup will tell you it is doing something momentously difficult, but Rigetti is biting off more than most – it’s working on quantum computing. All venture-backed startups face the challenge of building a business, but this one has to do it by making progress on one of tech’s thorniest problems.

Rigetti, which has 80 employees, has raised nearly $70 million to develop quantum computers, which by encoding data into the physics apparent only at tiny scales should offer a, well, quantum leap in computing power. “This is going to be a very large industry—every major organization in the world will have to have a strategy for how to use this technology,” says Chad Rigetti, the company’s founder. The strapping 38-year-old physics PhD worked on quantum hardware at Yale and IBM before founding his own company in 2013 and taking it through the Y Combinator incubator better known for software startups like Dropbox.

No company is yet very close to offering up a quantum computer ready to do useful work existing computers can’t. But Google has pledged to commercialize the technology within five years. IBM offers a cloud platform intended as a warmup for a future commercial service that lets developers and researchers play with a prototype chip located in Big Blue’s labs. After a few years of mostly staying quiet, Rigetti is now entering the fray. The company on Tuesday launched its own cloud platform, called Forest, where developers can write code for simulated quantum computers, and some partners get to access the startup’s existing quantum hardware. Rigetti gave WIRED a peek at the new manufacturing facility in Fremont—grandly dubbed Fab-1—that just started making chips for testing at the company’s headquarters in Berkeley.

The startup’s founder, who has a rare fluency in both quantum information theory and Silicon Valley business-speak, says that being smaller than its giant competitors gives his company an advantage. “We’re pursuing this long-term objective with the urgency and product clarity of a startup,” says Rigetti. “That’s something that large corporations aren’t culturally matched to do.” The urgency is existential: Google’s effort is a hunt for a new line of business; Rigetti’s a quest to have one at all.

At very small scales, different rules to those of our everyday reality become apparent. Particles can pull weird tricks, like kinda, sorta, doing two different things at the same time. Many millions are being sunk into quantum computing R&D because information encoded into quantum effects can do weird things, too. For certain problems, that should allow a quantum chip the size of your palm to provide more computing power than a team of giant supercomputers. Rigetti—like Google, IBM, and Intel—preaches the idea that this advance will bring about a wild new phase of the cloud computing revolution. Data centers stuffed with quantum processors will be rented out to companies freed to design chemical processes and drugs more quickly, or deploy powerful new forms of machine learning.

But for now, the quantum computing chips in existence are too small to do things conventional computers can’t. IBM recently announced one with 16 qubits—the components needed to build a quantum computer—and Google is gunning for around 50 qubits this year. Rigetti has made chips with 8 qubits; it says the new fab will speed up the experimentation needed to increase that number. No one knows for sure, but it’s estimated you’d need hundreds of qubits or more to do useful work on chemistry problems, which seem to be the lowest-hanging fruit for quantum computers.

Rigetti’s new cloud platform, Forest, is supposed to put the time it will take to get to that point to good use. The idea is to prime the pump, getting coders to practice writing programs for quantum processors now so they’re ready to release killer apps when the technology becomes practical. Forest is designed to support programs that use a quantum processor to give new powers to conventional software, a bit like a computer might have a graphics card, a hybrid model Rigetti claims will be vital to making the technology practical. The platform allows coders to write quantum algorithms for a simulation of a quantum chip with 36 qubits. Select partners can access Rigetti’s early quantum chips through Forest today, similar to how IBM has put its own quantum chips online.

All that might sound like Apple deciding to open the App Store before the iPhone even existed, but Rigetti argues that with a technology this different, people will need plenty of time to adjust. “Building a community of people who understand and know how to use the hardware is just as important as the hardware itself to have a successful product,” says Andrew Bestwick, the company’s director of engineering.

Rigetti will need time, more money, and some hard science to get to that successful product. There has been a genuine acceleration of progress on quantum hardware recently, says Michael Biercuk, a professor who works on quantum computing at the University of Sydney, and previously advised DARPA on the technology. But there’s still a lot to be figured out. “The entry of commercial players and startups has not changed the fundamental challenges in the field,” he says. One of the most difficult is getting qubits to work reliably when packed together into larger groups, says Biercuk. Quantum states are very delicate, and making qubits less flaky at holding onto information they encode is a major preoccupation for researchers in the field.

Despite all the confident talk of products and future customers, Rigetti’s founder doesn’t dodge when asked about the challenges. “No-one’s built this technology before and so as a field, and community, and company we just don’t know how long things are going to take,” he says.

Vijay Pande, a general partner with venture capitalists Andreessen Horowitz who led the firm’s investment in Rigetti, says he isn’t worried. He sees the startup bringing in some revenue even before its chips are ready to do real work, because some organizations and companies will pay to access them for R&D purposes. Rigetti is already talking to NASA, which believes quantum computers could help plan missions more efficiently, for example. And besides, this startup isn’t held to the same standards as one building a consumer mobile app. “This is old school, classic venture capital, with a high upside,” says Pande. It’s part of Silicon Valley’s own laws of physics. When there’s a really big potential payoff dangling somewhere up ahead, different rules apply.