Mathematician to share how crochet helped her understand complex geometry 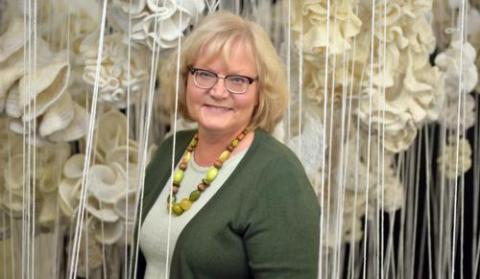 For its next event in its series of nontechnical talks, the Yale Quantum Institute invites attendees to bring along some yarn for crocheting.

In the talk, titled “Crocheting Adventures with the Hyperbolic Planes,” Cornell University mathematician Daina Taimina will demonstrate how to make a hyperbolic plane — a surface in which the space curves away from itself at every point — by crocheting them with yarn. She will also explain how she uses these crocheted models to understand complex mathematical geometry.

The talk will take place on Tuesday, Dec. 5, at 7:30 p.m. in Rm. 102 of Linsley-Chittenden Hall, 63 High St. The event is free and open to all, but registration is required. Tickets are available via Eventbrite.

Taimina’s talk is the fourth in a series of non-technical talks co-sponsored by the Yale Quantum Institute and the Franke Program for Science and the Humanities, which aims to foster communication, mutual understanding, collaborative research, and teaching among diverse scientific and humanistic disciplines. The series also aims to bring new regard to quantum physics and STEM by having experts cast new light on often-overlooked aspects of scientific work, according to Yale Quantum Institute manager Florian Carle.