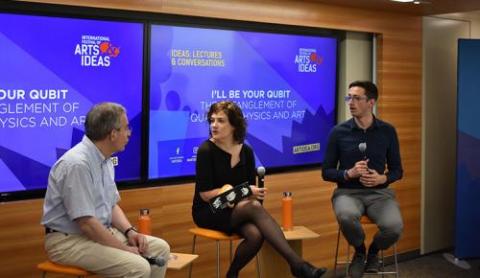 The International Festival of Arts & Ideas knew exactly where to go for an in-depth look at the entanglement of art and quantum physics: the Yale Quantum Institute (YQI).

“There are certain ideas in quantum physics that are transmitted to the public better in art than in equations,” said Devoret, the F.W. Beinecke Professor of Applied Physics at Yale and a leading researcher in the field of superconducting quantum circuits.

That’s because quantum mechanics can be counterintuitive, Devoret explained. For instance, there is the idea of quantum superposition — that an object can exist in two places simultaneously. Even more unusual is “the observer effect,” the notion that simply observing or measuring something in the quantum state will have the effect of altering it.

Devoret and his colleagues at Yale have done pioneering work in the field of quantum computing with superconducting circuits. They introduced the transmon qubit — qubits are units of quantum information — as well as techniques for distributing quantum information on wires. They also developed the first algorithms and quantum error correction in integrated circuits.

It’s a lot to take in and process, as artist Lewis discovered when she began interacting with YQI researchers a year ago. “The first thing that comes to mind when I tell people I work at the Yale Quantum Institute is a blank stare and a scary look,” Lewis said. “But it’s actually very fun and interesting.”

She also quickly found interesting parallels between the worlds of art and science. She noticed that when YQI scientists talk with each other, they invariably gravitate to whiteboards or screens where they can illustrate their thoughts visually, with diagrams.

Likewise, she said that artists can relate to the “observer effect,” because each person brings their own interpretation to a piece of art. “That seems like a very postmodern position, that there is no such thing as an impartial observer,” she said. 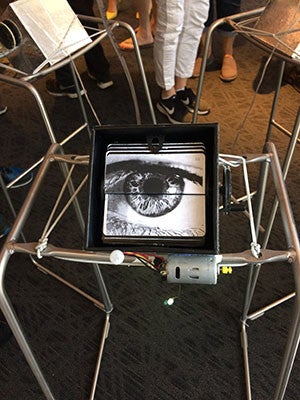 Photo: A portion of the art installation, “I’ll be your qubit” on display in the main meeting area at YQI, on the fourth floor of 17 Hillhouse Ave.

In conjunction with the festival event, Lewis created an art installation, also called “I’ll be your qubit.” The installation is located in the main meeting area at YQI, on the fourth floor of 17 Hillhouse Ave.

Yale launched YQI in 2015, bringing together more than 120 researchers and staff from around the university. The goal, then and now, is to revolutionize the way digital information is stored, processed, and safeguarded.

Lewis’ art installation at YQI consists of a curtained, cylindrical-shaped space that observers can enter. Inside, visitors encounter a series of objects resting on metal stands; visitors interact with the objects, reminiscent of the way qubits react inside a super-cooled quantum cavity.

“I wanted to make an interactive piece where the viewers could experience some elements of quantum physics,” Lewis told the Arts & Ideas audience. “I also wanted to give people a sense of the culture of this place.”