Public Conversation - Michel Devoret & Paul Kahn: Do you have to be a quantum physicist to speak to one? 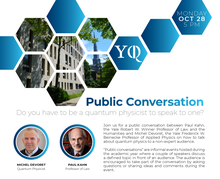 Join us for a public conversation between Paul Kahn, the Yale Robert W. Winner Professor of Law and the Humanities and Michel Devoret, the Yale Frederick W. Beinecke Professor of Applied Physics on how to talk about quantum physics to a non-expert audience.

“Public conversations” are informal events hosted during the academic year where a couple of speakers discuss a defined topic in front of an audience. The audience is encouraged to take part of the conversation by asking questions or sharing ideas and comments during the event.